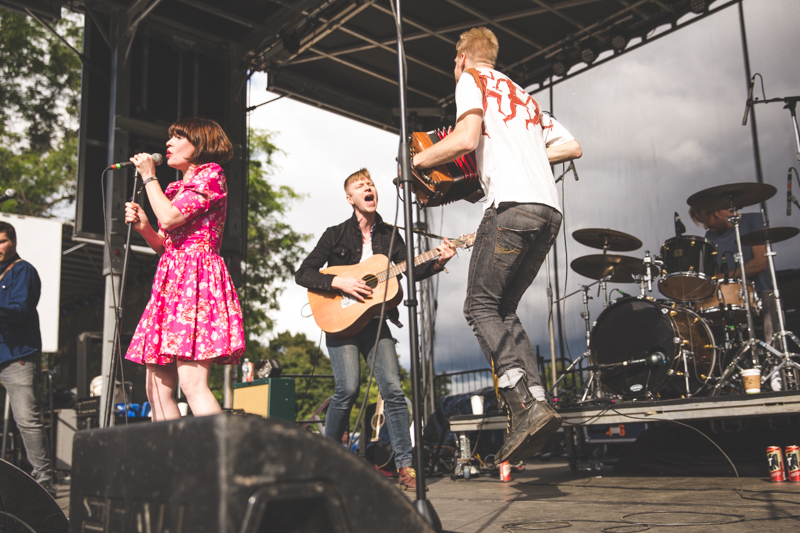 So excited to be back in the States. Riot Fest was great! Got new ear plugs moulded, did a load of press, Michael crowd surfed into the Chicago Tribune and we got to see our good friends Flogging Molly tearing up the stage. Oh and I might have had a bit too much to drink and did Salt’N’Peppa’s Shoop into a camera. Whoops. Check it out here

Next stop was Springfield Missouri. First we stop at our favourite Pizza place Pappo’s Pizzas and the beautiful Brianna makes us some tasty food. The venue is described as a shit hole by the sound guy. We love it!

Good friend Rosco joins us and things get weird as jet lag creeps in. No one cares though cos its Memphis the next day.

A day off in Memphis means we get to go to Sun Studio. Possibly one of the best tours I’ve been on. We get to soak up the spirit of the place where so much magic happened and stand in the spot where Elvis recorded his early classics. (Goose-bumps all round!)

After a quick $5 milkshake we head up to the Peabody hotel to see the the very strange ritual that sees 5 ducks make their daily withdrawal from the hotel foyer fountain up to their penthouse suite via an elevator under their own initiative. Memphis is strange. (Duckumentary to follow…)

Dinner sees us at the world famous (apparently) Gus’s Fried Chicken joint too which is amazing. (Heart attacks all round!)

Then we walk along the Missisipi, grab a beer, disguise it in brown paper bags and hit Beale Street. The home of the blues.

Amazing bands playing in every other bar. We can’t resist going in and next thing I know we’re dancing and singing drinking big ass beers and shots. Ooof.

Dan drags everyone home and now I have a hangover. (Headaches all round!)