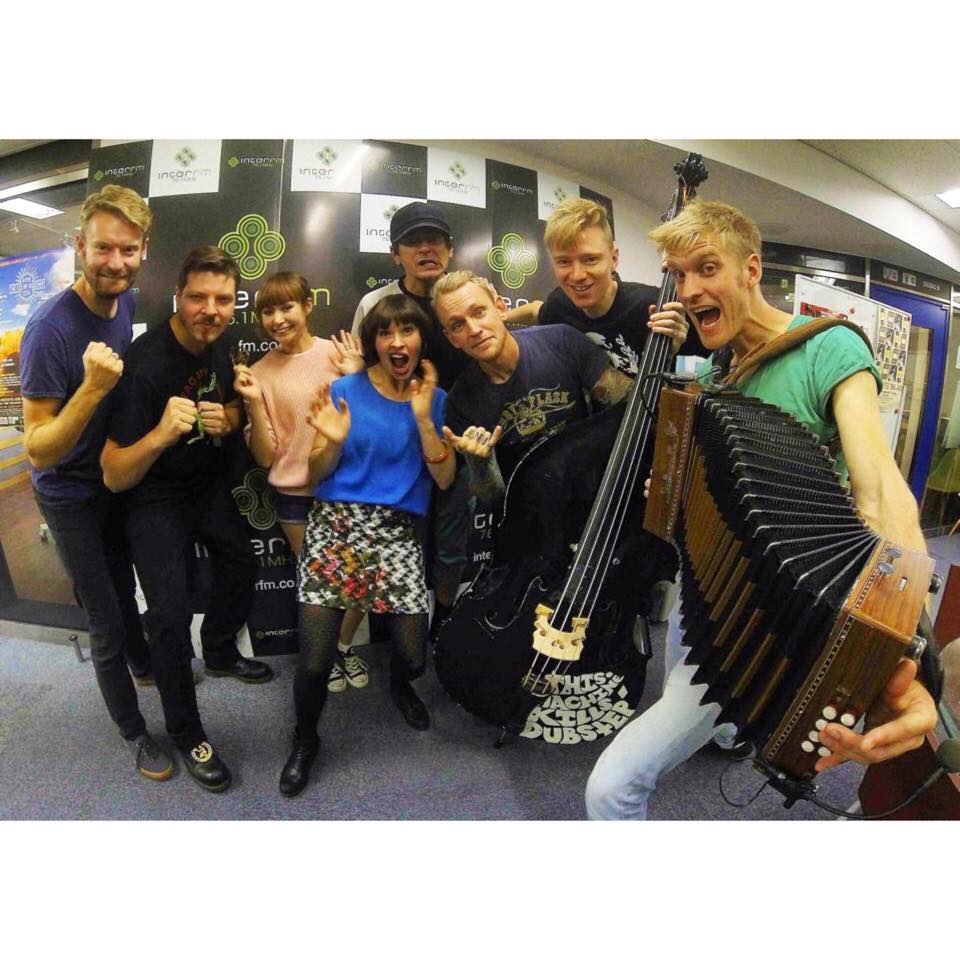 Japan – great to be back!

Yes. Skinny Lister are returning to Japan after our last momentous set of gigs at Fuji Rock last year. Amazing! We are all very excited ad as soon as we arrive (first thing in the morning) we hit Shibuya for green tea and food. None of us really have a clue what we’ve ordered but no one is disappointed when it arrives. De-lish!!

The first couple of days involve acclimatising and long nights awake. Jet lag is immense! Beer helps for the first few hours of sleep but not to get through the night. Maybe its because we’re all over stimulated by the Supermanesque music which blasts out over the streets, or the large amount of people and bright lights going on in the city. One thing we were all overwhelmed with was a kind of gambling game called Pachinko, but instead of winning money you collect a tray of barbarians. The noise is ridiculous as the balls fly out of the machines!

Monday – work starts. It’s great to see Sota, our label manager from Uncle Owen Records and, Chris and Sasha from Smash! Lucky to have such a crew!

First off we have 3 interviews. The first is for a website called British Music in Japan, then there is one for CD Journal and then one for the amazing named magazine called Bollocks! In theory we thought these meetings wouldn’t last very long but as we start into it we realize it’s going to take a while. The interpretations, even of short answers, seem to take forever. It’s great watching the listeners face and trying to guess which part they’re laughing at. Anyway, Go is the interviewer for Bollocks magazine and he also plays penny whistle in a Celtic punk band called Junior so we invite him to come and join us on stage for a couple of songs at the Tokyo gig. He accepts so we’re looking forward to that!

Next day we head to Inter FM radio station to do a live set and interview with Ready Stead George. It’s great fun and all over too quickly.

Back to the hotel and then Thom, Dan and I are off to Rockin On Magazine, which is a huge music magazine in Japan. After that we all met up and I went with our interpreter Satchi to a Japanese Onsen (hot spa) whilst the fellas had king of sushi! It’s always nice to have a bit of girl time!! The best bit was a bath filled with silk water – completely opaque and left a silky smooth finish! After that we met up again and went for drinks at our friend Buchi’s bar Café and Diner Studio. It was his birthday too so a cake and sing-a-long was necessary of course! We also had a little lesson in writing our names.

Wednesday is gig day and we can’t wait! We roll out of bed into a rehearsal room – a rude awakening but we want to make sure all is tight. It’s our first gig with the Mule returned so it feels good when it all comes together. After rehearsal we take some pictures in HMV and tower records and then head to sound check. The venue looks great and the rider even better with whole platters of sushi, beer rum and whiskey. Yum. Before the show we meet some competition winners who bring us saki and a great musical card this sets us right up for a 90 minute set. Whoop! It’s a party! There’s moshing, singing and jumping and I see the flagon bump around the crowd. Amazing times! We all get too excited, get drunk and then my last memory is being dancing on the bar and being carried to a table to dance there.

Thursday’s schedule is hectic. We catch a bullet train to Osaka, a large city to the west of Tokyo. Feeling a little worse for wear but good to travel a bit.

We have to sign a few things at two different Tower Record stores and then before we know it it’s time to get on stage. The party starts again and then dinner afterwards is always blooming good. One night we had Shabu Shabu where you cook your own meat in bubbling oil in the middle of the table. Loadsa fun!

Anyway, here’s a picture of Larry!