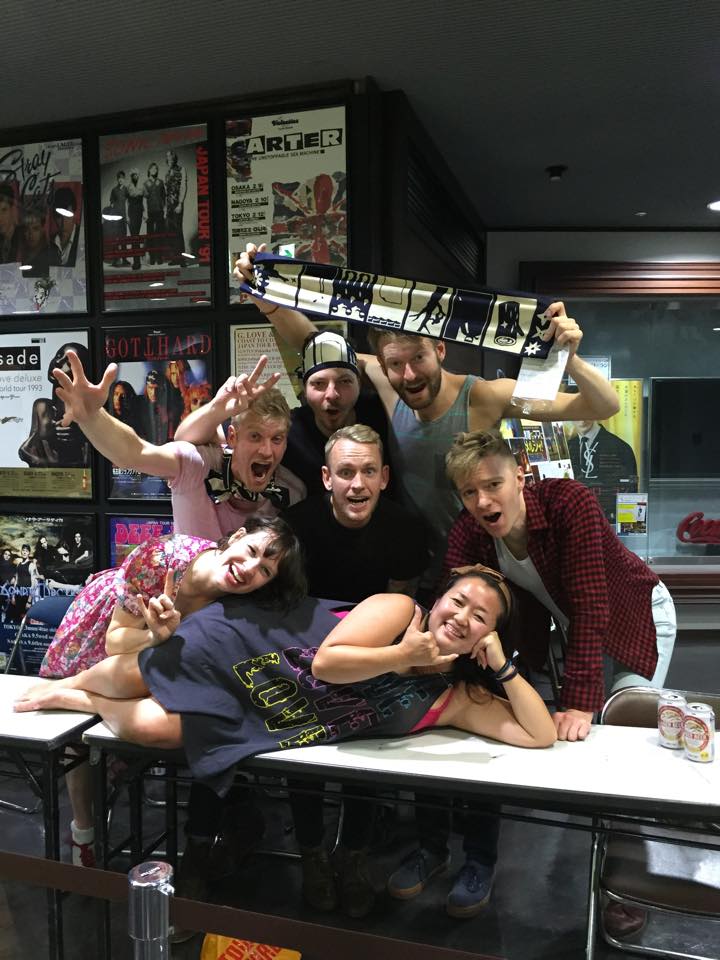 Japan – out with a BANG!

Next morning we’re up and at it again. It’s another train journey heading back easterly to a town called Nagoya (half way to Tokyo). On arrival we dump our stuff at the hotel and head to sound check at the venue. It’s another Club Quattro – this time in a shopping mall. I can’t wait to get looking at the shops! And as soon as we’re done, taking photos and signing stuff in Tower Records, we all have a look about.

Max darts off in a cab as he wants to find a shop recommended by someone on the previous night. You can tell he’s going with trepidation but I encourage him saying it’s an adventure!

He turns up later looking a little shell-shocked. He shows us a picture where the shop was. It looks dark and he stated that it wasn’t even open! He had to ring a doorbell as the cab had left him there in the middle of nowhere. He spoke no Japanese and they spoke no English. He didn’t buy anything and started to panic that he was going to miss the gig. Of course, we all laugh when he returns!

The gig is great fun as usual and after the show we meet some competition winners who are really great fun. Next up we meet up with Takayo who brings us lovely gifts and photos and has another photo lying on the signing bench.

Then it’s another delicious dinner. I’m drunker than I planned so bedtime is a little blurry.

Next day is our last day in Japan. Boo hoo! It’s an early start and I know it’s going to be a full day. Another train journey and then we’re picked up and heading for the festival Asagiri Jam. We can see the top of Mount Fuji above the clouds. It’s immense! It’s lucky too as there were thoughts that the festival would be cancelled due to a typhoon. Anyway, luckily the weather looks good and off we go for our last festival fun for the year! Exciting.

The site looks great and we pick up our free t-shirts straight away and crack on with beer. Sota has found a fun plastic Japanese style kettle we can use for a flagon since ours was still missing (don’t worry people – this kind of thing happens especially when you’re as drunk crazy as we were that night in Tokyo).

It’s not the first time a flagon went missing and I’m pretty sure it won’t be the last! Anyway, we have a funny flagon, the crew set up and off we go! The crowd is immediately receptive and we have a blast! The Japanese crowd is so much fun and the 50-minute set goes way too fast!

We eat some lovely food and finish off a bottle of saki as we head back to Tokyo for a last night out! Larry is the DJ and he rocks the tunes that keep up awake and ready to hit the Karaoke bars. Shame that the best hotel we stay in is this one and we’re not planning on sleeping before we take off for our plane at 5am. The hotel is the one that features in James Bond film ‘You Only Live Twice’ and yep it’s pretty swanky. The Beatles also stayed here during there only Japan tour.

…we drunkenly part ways with our Japanese friends and Larry heads off to bed whilst the band head out. OUT OUT! We eat some weird food – skin on sticks.? and then its off we go for a sing a long. We pay for an hour but end up staying for 4. The glasses smash, the keys go off and there’s dancing, screeching and general fun. Whoop!

We make it home in time for some room service and another beer before it’s time to get picked up. The encounter at the airport is pretty shocking. I remember a bottle of rum being confiscated at security and then its sleeeeeeep on the VERY long plane journey home. Thank you for making us feel like rock stars Japan! We LOVE IT!