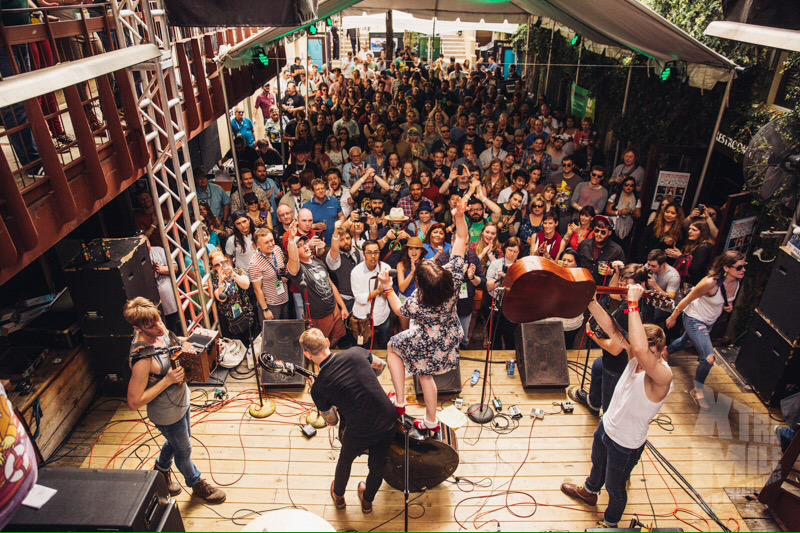 Green t-shirts and drinks a plenty with a queue outside…Irish dancers, bass Crowd surfing, table top dancing and shoulder riding all featured at some point and afterwards we head out…somewhere….not sure where. I can’t remember. Oooh maybe we met up with the guys from Beats Delicious, and maybe we queued somewhere and didn’t get in, oh and then free vodka…its morning. Early. And the alarm has gone. Got to get up and play the Convention Centre…what’s this going to be like…? Hungover as hell. Never followed a presentation before! We get going and survive it before having to peg it down to Cedar Street Courtyard – an outdoor gig on FLOODfest stage playing before Carl Barât & The Jackals and Frank Turner. A much more favourable setting. We relieved to be back in a true gig setting and have a great fun time.

A bit of press after that for Billboard, Flood Magazine & The CW Austin (see the interview here) then we’re out again…we see Dead Sarah play an unofficial gig which totally rocked..Then it’s Thursday and we can hardly believe the week is nearly over?!@! We share tacos at El Ranchos new house guests Arrows of Love, a London based band and they’re ACE!

We do an interactive Q&A in the house backyard with a Stetson, dungers and beer and then it’s time to pack and get into town as we leave at 3am and there’s no plan to pass on free drinks whilst we still can. I have a quick interview with There Goes The Fear, then we have some free drinks then meet up with our good friend John Halperin before heading to Lamberts BBQ to play our final showcase. The place is very quiet on arrival so we get a little worried but after a few beers we get ready and when I head back upstairs the room has filled and I get quite excited! It’s a blast of course!

Truly flattered to see Kevin Lyman at the end apologising for missing the show but explaining he got knocked off his bike rushing to see us. Eternally grateful Kevin. Nice to chat!

Then we hoof it to see Arrows of Love but miss that…we all drink though and then someone says it’s time to go. See you later SXSW. See you later Austin…we will be back! (DETERMINED)