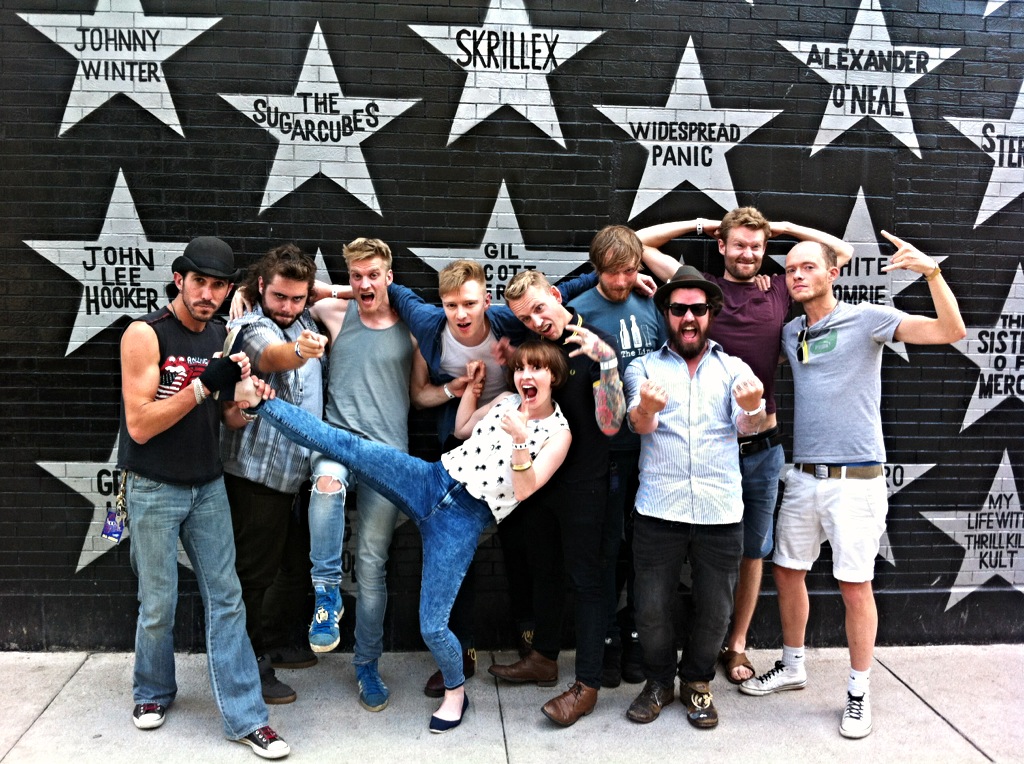 We’re all excited by a day off and even though it’s still an 8 hour drive to Philly, we stop by a pub and watch England play. We’ve been on the road constantly since arriving in the States so it feels amazing to get a cab into town and watch some football, drink some drinks and eat some burgers – and errr…deep fried Oreos!!? No one really minds that England didn’t win.

Looking forward very much to seeing our good friend and booking agent Eva we hit the road the next day! We play the North Star Bar where we played last time and have great fun – all getting a little too drunk! The boys go to the ‘real’ Rocky steps this time (discovering they went to the back of the building last time – duh) and we see old friends and new at the gig.

Next up is Boston. We’re excited about this show especially as it’s already SOLD OUT! It definitely feels good to be back!  The crowd is amazing and Michael introduces them to our manikin, Rachel, who decides to take to the sky and crowd surf about the packed bar. Thom the drummer also runs on stage in Rachel’s bikini like a crazy nut. A great show and a great party! Cheers Boston!

New York is next on the agenda. IT’S UNBELIEVABLY HOT!!! We can barely think let alone sort all our stuff but eventually we do it and when we return to the venue, we’re grateful to Dave Engelman for the bloody great big strong rum he’s bought us. Uh oh!!! Tonight is going to be party night! Beer is spilt a plenty and we’re all out to party as we have 3 days off in New York!! After the bottle of rum is drunk and we’ve luckily avoided being locked in at the venue, we head out on to the streets of New York… There’s lots of happy faces and we’re all surprised when Thom the drummer takes down most of the fellas in the bar when challenged to arm wrestling competitions…

Our three day break in New York is great and well deserved if I do say so myself! No mean feat playing so many gigs on as many hangovers without time off. Although when you think we should have rested we certainly didn’t do that…we crossed the Brooklyn Bridge, drank coffee in Little Italy, played spike ball, drank copious amounts of margaritas in various parks, saw The National play, ate lots of great food, watched football and celebrated the birthdays of KC from Onward etc. and Forest Woodward, friend and photographers.

Grand Rapids is fun, reuniting with The Bangups who open up for us and Ultimate Mark from Stepdad – both bands we met on Vans Warped Tour 2012. We’re all really excited though as the next day we head to what is supposed to be the largest waterpark in the WOOOOORRRLLLD!! I’m not sure about that but its great to go down the devil’s drop and other various flumes before heading to Hades a rollercoaster that shocked even me!

I can’t believe Thom, usually terrified of rollercoasters did it and came off smiling. Unbelieavble and good fun before the last two gigs before home. Minneapolis and Summerfest. The party bus at Minneapolis set the gig off with a bang and it was definitely one of the most drunken nights of the tour, with people hanging from the rafters!…it was great fun though and set us off to Summerfest with warm hearts despite heavy heads. This would be our last show with our good friends Onward Etc . We’ve had an amazing time on the road with these guys – a great band and the nicest guys ever! We’ll miss em.!

Now back in the UK and ready to take on the fields of GLASTONBURY on the AVALON STAGE on Saturday! WhooooOOOOOOOOOP!